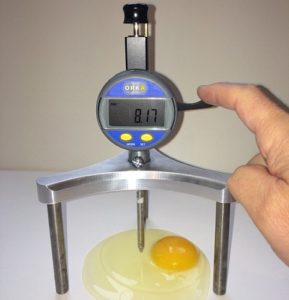 The Haugh unit (pronounced: “how”) is a measure of the internal quality of an egg.

The test was introduced by Raymond Haugh in 1937 and is considered one of the most significant measures of egg quality next to other measures such as eggshell thickness and eggshell strength.

An egg is weighed, then broken onto a flat surface (breakout method), and a micrometer used to determine the height of the thick albumen (egg white). The height, correlated with the weight, determines the Haugh unit, or HU, rating. The higher the number, the better the quality of the egg (fresher, higher quality eggs have thicker whites).
Though Haugh unit provides the indication of freshness of the egg, it does not provide other information such as micronutrient or vitamins contained in the egg.

The formula is as below:

The Haugh unit value ranges from 0 – 130 and it can be ranked as below:

When calculating Haugh unit, one should measure the height of the thick albumen (egg white) that immediately surrounds the yolk.

However, it goes without saying that one should be careful as to which part of albumen to measure as the result of Haugh unit calculation may differ depending upon which part of egg white you choose to measure.

For your reference, below is the USDA‘s Terms descriptive of the egg white and its Haugh unit:

(a) Clear. A white that is free from discolorations or from any foreign bodies floating in it. (Prominent chalazas should not be confused with foreign bodies such as spots or blood clots.)

(b) Firm (AA quality). A white that is sufficiently thick or viscous to prevent the yolk outline from being more than slightly defined or indistinctly indicated when the egg is twirled. With respect to a broken-out egg, a firm white has a Haugh unit value of 72 or higher when measured at a temperature between 45 o and 60 oF.

(c) Reasonably firm (A quality). A white that is somewhat less thick or viscous than a firm white. A reasonably firm white permits the yolk to approach the shell more closely which results in a fairly well defined yolk outline when the egg is twirled. With respect to a broken-out egg, a reasonably firm white has a Haugh unit value of 60 up to, but not including, 72 when measured at a temperature between 45 o and 60 o F.

(d) Weak and watery (B quality). A white that is weak, thin, and generally lacking in viscosity. A weak and watery white permits the yolk to approach the shell closely, thus causing the yolk outline to appear plainly visible and dark when the egg is twirled. With respect to a broken-out egg, a weak and watery white has a Haugh unit value lower than 60 when measured at a temperature between 45 o and 60 o F.

Before the Haugh Unit, the yolk index, which is defined as the ratio of yolk height over yolk diameter and provides indication on the freshness of the egg, was used from time to time, but was turned down after the introduction of the Haugh unit.